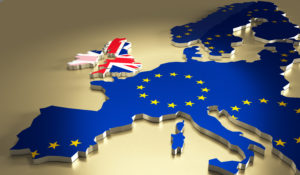 The term 'Brexit' is a portmanteau word, contraction of "Britain" and "Exit" which designates the exit of the United Kingdom from the European Union. In 2013, Prime Minister David Cameron promised to hold a referendum on the UK's possible exit from the European Union if his party won the legislative elections in 2015. Despite unfavorable polls, the Tories won the ballot. A referendum was therefore organized on June 23, 2016, mobilizing a large number of voters and won by the 'Brexiters' with 51.9% votes against 48.1% for the 'Remain', although Cameron himself campaigned for the upkeep. He resigned and was replaced by current Prime Minister Theresa May, although she also supported the 'Remain', Boris Johnson for his part, the main architect of 'Brexit', having declined the post. It is therefore she who is in charge of organizing the 'exit' from her country.

The United Kingdom is due to leave the European Union in March 2019, i.e. after two years of negotiations provided for by the triggering of Article 50 of the Treaty on European Union, which sets out the conditions for leaving a Member State from the United Kingdom. 'Union. This article does not specifically detail how the withdrawal should be organized; it simply stipulates that the Union and the outgoing State must negotiate in order to fix an agreement describing the modalities of this withdrawal, which the European Council will then conclude by qualified majority, after approval by the European Parliament. The main players in these negotiations are the President of the European Commission Jean-Claude Juncker and Michel Barnier, the EU's chief negotiator for Brexit. Across the Channel, Theresa May's negotiating committee is made up of conservative ministers including the Secretary of State for Brexit, the Eurosceptic Dominic Raab.

In early 2018, the Twenty-Seven agreed on the conditions for the post-Brexit transition period, which will run from March 2019 to December 2020. This period should allow the two parties to prepare for their future relations, in particular by means of 'commercial agreements.

This agreement should mainly describe the terms of the future partnership between Europe and the United Kingdom, in particular the amount that the country will have to pay into the European budget. It will also have to define the status of European citizens living in the United Kingdom and reciprocally that of the British currently living in one of the EU countries, resolve the problem of the border with Ireland, and define the status of Ireland from North. England will also have to face the independence and Europhile rise of the Scots. It will also be necessary to decide on the maintenance of British military cooperation. Another important project concerns the establishment of a new framework for trade in products and services, while nearly half of British exports are destined for the European Union.

What will be the bill for leaving the EU? The UK could have to pay up to 60 billion euros to the EU budget, corresponding to the commitments made until the end of the budget cycle in 2020.

According to a recent study published by the Center for European Reform (CER), the UK's decision to leave the European Union has already cost the UK state £ 500 million per week (€ 560 million). The British economy would be 2.5% lower than it would have been with a stay in the EU. This corresponds to 52 billion pounds for two years. A figure that has been steadily increasing since then. Companies are said to be more cautious about their investments due to the political instability that makes investors fear that no Brexit support plan is planned for companies.

An impact in France:

But Brexit will also cost French companies dearly, nearly 4 billion euros per year. France is the third most affected country in the EU after Germany and Holland. The sectors most affected will be the food industry, the automotive industry and consumer goods, says a study by Oliver Wyman in collaboration with Clifford Chance.

The political consequences of Brexit for the European Union are difficult to predict. The exit of the United Kingdom is a catastrophe for some: in fact, the European Union loses one of its three great powers, one of the most important financial places in the world, the first diplomatic partner of the United States in Europe as well as one of the only European states maintaining a substantial regular army. For others, it can help bring the Union back together: the United Kingdom being historically one of the countries least favorable to European integration, its exit can encourage other states to move forward.

The self-diagnosis allows companies to analyze their level of preparation before BREXIT. This is particularly useful for companies that import or export from and to the UK but also those that have subcontractors or buy parts from GB.

Back to documentary resources