Cathelain has developed a concept of connected bolt which aims to remotely measure tiny variations in length (precision of 0.5 µm) thus allowing detection of untimely loosening that could endanger the integrity of the installation.

This remote measurement makes it possible to reduce in situ verification costs and to ensure permanent monitoring of installations located in dangerous, contaminated or difficult to access areas.

The principle of operation is based on the insertion into the bolt of an optical fiber operating on the principle of polarimetric interferometry in white light which is a concept proven in the nuclear industry for many years.

The installation to be monitored can be located up to 7 km from the measuring sensor.

The optical fiber is not sensitive to beta or gamma radiation and can operate at a temperature between -290 and + 320 ° C.

The installation of the C-Bolt does not require any special tools.

C-Bolt® is a concept which allows the monitoring of the elongation of assembly elements.

It is intended for safety assemblies which require vigilance (permanent or cyclical) in order to ensure the integrity of the tightening.

It also makes it possible to control the tightening of the assembly with great precision.

The principle is to integrate into screws, studs, and other threaded rods, an optical fiber of 0.25mm diameter, housed in its center inside an axial hole of 0.5 millimeter. It is secured to the bolts by an oven-polymerized bonding (certified for more than 40 years in aeronautics and nuclear) which resists temperature exposure up to 320 ° C.

The fiber optic technology used is a patented process based on " white light polarimetric interferometry ".
This method makes it possible to calculate the minute variations in length by emission of a light (spectrum of a light wave). This is projected onto a set of mirrors and its return signals are analyzed in order to determine the elongation of the bolt to within 0.5 µm.

The fiber is connected before or after tightening by a connector. It connects the probe to a device called an "interrogator" which is deported by a cable duct, at a distance of up to 7 kilometers. This instrument can support up to 1000 probes at the same time.

Other sensors, based on this same technology, also make it possible to detect temperature, pressure and movements with very high precision. The same interrogator is used to manage all these installed sensors. 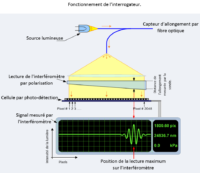 This information is communicated on a configurable interface (HMI) which displays the elongation curve in real time and which allows the operator to be alerted if necessary because proactive parameterization which defines alarm thresholds is possible. It also supports the identifications of each installed probe, which allows them to be precisely located in the work environment.

C-Bolt® is installed in most industrial zones and in all types of intervention sectors. Indeed not only is it not emitting, but it is also insensitive to gamma / beta rays, magnetic fields as well as frequencies. Only the interrogator, which can be deported outside the zone, consumes energy (from 2 to 5W). In addition, several hundred versions of protective sheaths (referenced on the Telecom market) can resist immersion (300bars), shocks, chemical attacks, rays, radii of significant curvature, etc.

By its precision as well as the memorization of readings, C-Bolt® enables the development of the elongation of an assembly to be detected, even going so far as to discern its deterioration linked to its corrosion.

The optical fiber used in the ionizing radiation zone consists of pure silica. Tests have resulted in favorable reports for its use in an irradiated area (see the report by: Cheymol,

The exposure temperature range of the assembly is important. C-Bolt® is currently usable from -290 ° C to + 320 ° C. It should be noted that the optical fiber is insensitive to temperature. Its expansion is zero and therefore will not disturb its lengthening readings.

Note that the position of the gauge on the neutral axis makes it insensitive to torque phenomena, which only allows the extension to be viewed during tightening.

The advantages of C-Bolt® are multiple:

On a security level:

During tightening operations and thanks to its very reactive signal (depending on the device used from 1000 measurements / s to 5 measurements / s), C-Bolt® allows the elongation to be managed with very high 0.5 µm precision.
Nb: It is obvious that it must be necessary to have at least one end available in order to connect the probe to the interrogator. This can be complicated in the case of an implanted Chc screw, or a torque tightening of a Th screw on a threaded frame, via a hydraulic wrench (by a bell socket), unless a system is fitted there. specific.

During the operation of the devices, the installations maintain their integrity thanks to the live monitoring of their assemblies. An alarm can be triggered and be linked to the sending of email or SMS.

It should be noted that this technology makes it possible to remain neutral on its sensor part. Indeed the optical fiber is completely passive. Its installation in hazardous areas is possible because it conveys only light which is in no way harmful.

On the economic plan :

By instantly detecting the start of a failure, C-Bolt® enables conditional preventive maintenance (otherwise called predictive maintenance). Indeed, this method submits the intervention at the right time and in the right place. This greatly limits production stoppages and precisely targets the work to be done.
Some assemblies are in areas that are difficult to access due to their locations in dangerous locations, but also in locations that are very difficult to access, such as an underwater installation.
Preventive shutdowns, and often unnecessary, can be very costly not only in terms of intervention but also the lack of production.

The minimalist housing of the probe does not call into question the calculations of the assembly. Indeed, tests allow us to prove that a hole of 0.5mm in diameter in the axial direction (0.2mm²) has little effect on the mechanical resistance of the screw. C-Bolt® can then be integrated into an existing installation only by fitting one of the assembly elements present.

A new President for the Measurement Network

The General Assembly of the Measurement Network was held on June 29 in Cergy. 19 directors now form the Board of Directors and the new Bureau of the Association which has appointed Claunel Massiès as President as representative of the WIKA company. He will be surrounded by three Vice-President (e), Martine Failly, representative of Blet Measurement Group, Marc-Robert…

Meeting of the Mutualized Purchasing group